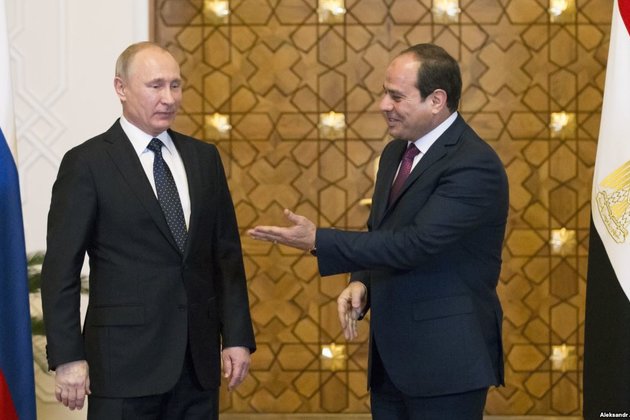 Putin said at the start of the talks that bilateral trade rose by 62 percent last year.

Ushakov added that Putin and Sisi were to discuss international issues, focusing on the situations in Syria, Libya, Yemen, and the Palestinian-Israeli settlement.

Sisi on October 16 urged Russia to resume direct flights to Egyptian resorts even as the Kremlin urged Egypt to purchase more Russian arms during bilateral talks in Moscow.

Russia suspended direct flights to Egypt in November 2015 after a bomb planted by an Egyptian affiliate of the Islamic State extremist group brought a Russian passenger plane down over the Sinai Peninsula, killing all 224 people on board.

Flights between Moscow and Cairo resumed in April after Egyptian officials fortified their capital's airport security, but talks about restoring direct air travel from Russian cities to Egypt's Red Sea resorts have not produced an agreement.

Addressing the Russian parliament's upper house in Moscow on October 16, Sisi emphasized that restoring the flights was essential for Egypt's tourism industry.

After meeting with Russian lawmakers and cabinet ministers in Moscow, Sisi met over dinner with Putin in the Black Sea resort of Sochi, where he was offered a presentation of weapons the Kremlin hopes Egypt might buy.

Egypt has signed deals to buy billions of dollars' worth of Russian weapons, including fighter jets and assault helicopters. When Putin visited Cairo in December 2017, officials also signed a deal for Russia to build a nuclear power plant in Dabaa.

The two leaders have developed a close personal rapport and have sought to expand bilateral ties, which have strengthened considerably over the past few years.

Bilateral trade rose by 62 percent last year, reaching $6.7 billion, and continued to expand at a swift pace this year, according to figures presented by Ushakov.

Russian grain exports currently account for about 70 percent of Egypt's needs, he said.

With reporting by AP, Reuters, and Interfax