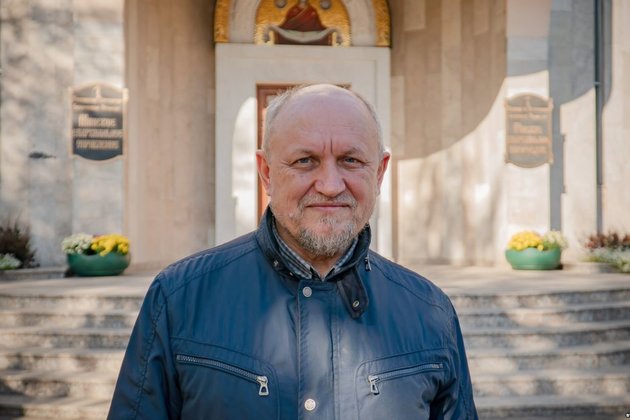 MINSK -- A Minsk priest never thought that taking pictures of visiting Russian Orthodox head Patriarch Kirill and posting them on Facebook would get him banished from the church.

But that's exactly what happened to Alyaksandr Shramko on October 16 when he received an official letter from the head of the Belarusian Orthodox Church, Metropolitan Paval, saying he had been stripped of his duties at his St. Michael the Archangel Church parish and banned for one year from all church activities.

'I do not know really why [the photos were] such a big problem, but I was told that I have dishonored everyone -- Belarus, the [Orthodox] church, and the patriarch,' Shramko told RFE/RL's Belarus Service.

His letter from Paval said he had lost the right 'to serve, wear the cross, or [give] blessings' because of the 'systematic publication in the media [of photos and text] that discredited the Orthodox Church and sowed enmity and hatred in the hearts [of its faithful].'

It was at the major religious gathering that Kirill officially made the decision to sever ties with the Istanbul-based Ecumenical Patriarchate of Constantinople due to its October 11 decision to grant independence to the Ukrainian Orthodox Church, which had been under Moscow's jurisdiction since 1686.

'I was at the meeting with the patriarch [on October 13], took pictures, and posted them with my comments on Facebook,' said Shramko. 'It seems to me their main objection is that I focused mainly on [Patriarch Kirill's] security guards, that there were too many of them, and that it is not allowed to take their pictures.'

​Shramko added that he had also snapped photos of Kirill's Mercedes Benz escort to the church, including a shot of the special, red 0002 MI license plate.

'It turns out that it is not allowed to show that car's license plate in public,' said Shramko.

He said security officials later came and spoke to him about the photos and then informed the patriarch about the issue.

Shramko said he was on his way to bless the opening of a new church on October 15 when he received a call from Metropolitan Paval and was told not to go and that he would be banned from carrying out church activities.

An official letter from the head of the Belarusian Orthodox Church, Metropolitan Paval, said that Shramko had 'discredited the Orthodox Church and sowed enmity and hatred in the hearts [of its faithful].'

One Russian Orthodox Church official, Protodeacon Andrei Kuraev, told RFE/RL that he disagreed with the action taken against Shramko.

'It's one of those decisions which we make and afterward we wonder, 'Why don't you like us?'' said Kuraev, a noted Orthodox theologian. 'It was hysterical on the part of the rulers. Father Shramko did not violate any laws. There was no reason to punish him. [Kirill's] visit to Minsk will now be remembered exactly by this willfulness.'

There was some hope for Shramko, however.

He was informed by Paval that his situation would be reviewed in one year and that he could be reinstated.

Pete Baumgartner is a senior correspondent who primarily covers politics and sports in Central Europe, Central Asia, and the Caucasus.

Ales Dashchynski is a correspondent for RFE/RL's Belarus Service.

Dzmitry Hurnievic is a correspondent in Prague for RFE/RL's Belarus Service.