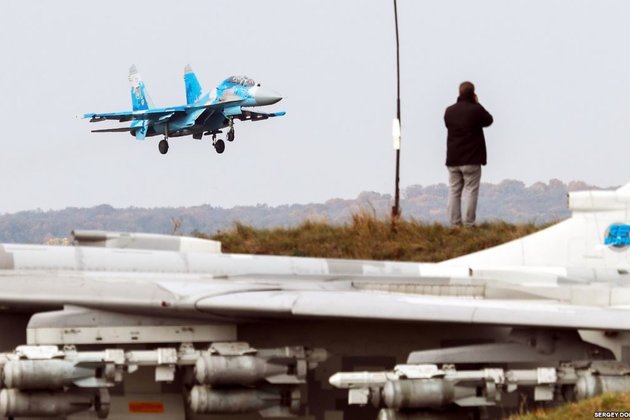 The U.S. military has confirmed that a California-based airman was killed in the crash of a two-seat Ukrainian fighter jet during a joint exercise with NATO air forces in Ukraine.

A Ukrainian aviator was also killed in the October 17 crash of the Sukhoi Su-27 plane in the Khmelnytskyy region, some 180 kilometers southwest of Kyiv, the Ukrainian and U.S. militaries said.

'This is a sad day for the United States and Ukraine,' said Major General Clay Garrison, director of the Exercise Clear Sky 2018 maneuvers.

Military authorities said the bodies of the two airmen had been recovered.

The identity of the American was being withheld for 24 hours to allow for the notification of family.

The U.S. Air Forces in Europe and Africa said the American airman was taking part in a single-aircraft familiarization flight with a Ukrainian counterpart when the accident occurred.

No other aircraft were involved, and an investigation is being conducted by both militaries to determine the cause of the accident, it said in a statement.

Earlier, the U.S. Air Force said it was aware of 'reports claiming a U.S. casualty,' but it did not confirm the death.

The Ukrainian military said participants in the Clear Sky maneuvers held a ceremony at a nearby airfield to commemorate the airmen killed in the incident.

Some 950 personnel from Ukraine, Belgium, Denmark, Estonia, the Netherlands, Poland, Romania, Britain, and the United States are participating in the exercise.