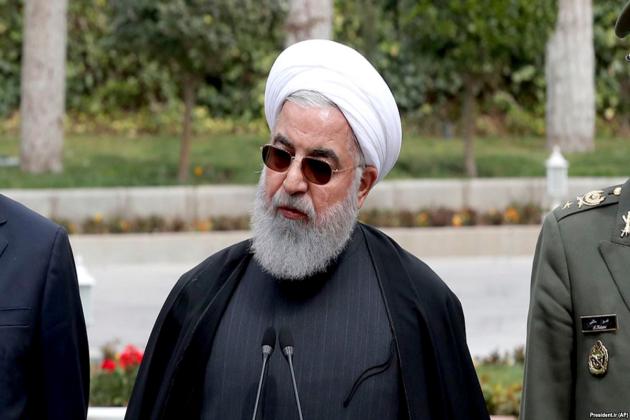 A senior U.S. diplomat has told President Hassan Rohani that he should give Iranians jobs and employment instead of urging them to curse the United States for their country's deteriorating economic situation.

In a tweet in Persian on March 19, U.S. special representative for Iran Brian Hook, who sometimes responds to similar statements by senior Iranian officials, said: 'In response to the paralyzed economy, Rohani asked the Iranian people to put a curse on United States, Israel, and Saudi Arabia! By resorting to curses and magic he is after blaming others for his economic record.'

'The people of Iran would like to have jobs, instead of putting curses,' Hook added.

Rohani, in televised remarks on March 18, called on all Iranians to put a curse on the United States, Israel, and Saudi Arabia, in an apparent attempt to deflect criticism for economic hardships following Washington's withdrawal from a nuclear deal and the reinstatement of U.S. sanctions on Tehran.

'Put all your curses on those who created the current situation,' Rohani said, adding that 'the United States, the Zionists [Israel],' and Saudi Arabia were to blame. He didn't say what kind of curses the Iranians should invoke.

Rohani, who came to power in 2017 promising to improve the economy, has claimed that the United States wants to 'dominate' Iran.

After the U.S. withdrawal from the 2015 nuclear agreement with Tehran in May 2018 and reimposition of tough economic sanctions, Iran's economy has nosedived, with a steep devaluation of its currency, skyrocketing prices for essential goods, and frequent protests and strikes.

The crisis has hurt Iranians and prompted Rohani's critics to openly call for his ouster.

U.S. officials have repeatedly said that their aim is not to hurt the Iranian people, but to force the Islamic republic to renegotiate the nuclear agreement.

On March 17, Rohani also asked Iran's judiciary to pursue legal action against U.S. officials on the grounds of 'crimes against humanity.'

With reporting by Reuters and AP RFE/RL's Radio Farda

RFE/RL's Radio Farda breaks through government censorship to deliver accurate news and provide a platform for informed discussion and debate to audiences in Iran.